The Curses of Heterogeneity in Big Data

Big Data is daily topic of conversation among data analysts, with much said and written about its promises and pitfalls. The issue of heterogeneity, however, has received scant attention. This is unfortunate, since failing to take heterogeneity into account can easily derail the discoveries one makes using these data.

This issue, which some may recognize as an example of ecological fallacy, first came to my attention via a paper elegantly titled “Heterogeneity’s ruses: some Surprising Effects of Selection on Population Dynamics” (Vaupel and Yashin, 1985). Authors discuss a variety of examples where the aggregated behavior of a heterogeneous population, composed of two homogeneous but differently behaving subpopulations, will differ from the behavior of any single individual. Consider the following example. It has been observed that the recidivism rate of convicts released from prison declines with time. A natural conclusion one may reach from this observation is that former convicts are less likely to commit crime as they age. However, this is false. In reality, there may be two groups of individuals “reformed” and “incorrigible” with constant – but different – recidivism rates. With time, there will be more “reformed” individuals left in the population, as the “incorrigibles” are sent back to prison, resulting in decreasing recidivism rate for the population as a whole. This simple example shows that “the patterns observed [at population level] may be surprisingly different from the underlying patterns on the individual level. Researchers interested in uncovering these individual patterns, perhaps to help develop or test theories or to make predictions, might benefit from an “understanding of heterogeneity’s ruses.” (Vaupel & Yashin)

My colleagues and I have been tricked by heterogeneity time and again. As one example, our study of information spread on the follower graphs of Twitter and Digg revealed that it was surprisingly different from the simple epidemics that are often used to model information spread. In a simple epidemic, described, for example, as an independent cascade model, the probability of infection increases monotonically with the number of exposures to infected friends. This probability is measured by the exposure response function. The figure below shows the exposure response function we measured on Twitter: the probability for becoming infected (i.e., retweet) information (a URL) on Twitter as a function of how many friends had previously tweeted this information. In contrast to epidemics, it appears as though repeated exposure to information suppresses infection probability. We measured an even more pronounced suppression of infection on Digg [Ver Steeg et al, 2011], and a similar exposure response was observed for hashtag adoption following friends’ use of them [Romero et al, 2011].

Figure: Exposure response on Twitter. Probability a user will retweet a message containing a URL after a number of friends have tweeted about it. Retweet probability is averaged over all users. 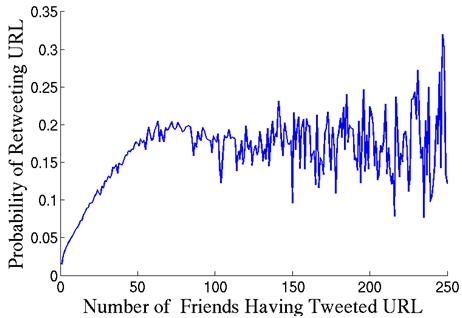 It is easy to draw wrong conclusions from this finding. In “What stops social epidemics?” [Ver Steeg et al, 2011], we reported that information spread on Digg is quickly extinguished, and attributed this to the exposure response function. We speculated that initial exposures “inoculate” users to information, so that they will not become infected (i.e., propagate it) despite multiple exposures. Now we know this explanation was completely wrong.

Figure: Exposure response of subpopulations of Twitter users, differentiated according to the number of friends they follow. 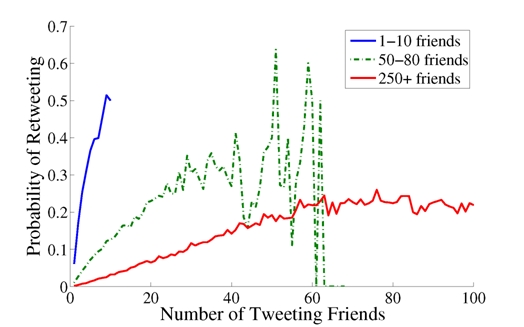 The exposure response function, while aggregated over all users, does not describe the behavior of any individual Digg or Twitter user – even the hypothetical “typical” user. In fact, there is no “typical” Twitter (or Digg) user. Twitter users are extremely heterogeneous. Separating them into more homogeneous sub-populations reveals a more regular pattern. Figure 2 shows the exposure response function for different populations of Twitter users, separated according to the number of friends they follow (large fluctuations are the result of small sample size). Why number of friends? This is explained in more detail in our papers [Hodas & Lerman 2012, 2013], but in short, we found it useful to separate users according to their cognitive load, i.e., the volume of information they receive, which is (on average) proportional to the number of friends they follow [Hodas et al, 2013]. Now, the probability that a user within each population will become infected increases monotonically with the number of infected, very similar to the predictions of the independent cascade model.

Figure 2 has a different, more significant interpretation, with consequences for information diffusion. It suggests that highly connected users, i.e., those who follow many others, are less susceptible to becoming infected. Their decreased susceptibility in fact explains Figure 1: as one moves to the right of the exposure response curve, only the better connected, and less sensitive, users contribute to that portion of the response. However, despite their reduced susceptibility, highly connected users respond positively to repeated exposures, like all other users. You do not inhibit response by repeatedly exposing people to information. Instead, the reason that these users are less susceptible hinges on the human brain’s limited bandwidth. There are only so many tweets any one can read, the more tweets you receive (on average proportional to the number of friends you follow), the less likely you are to see – and retweet – any specific tweet. If it was not for recognizing heterogeneity, we would not have found this far more interesting explanation.

[3] Hodas, N. O., Kooti, F., and Lerman, K. (2013). Friendship paradox redux: Your friends are more interesting than you. In Proceedings of 7th International Conference on Weblogs and Social Media.

[5] Romero, D. M., Meeder, B., and Kleinberg, J. (2011). Differences in the mechanics of information Diffusion Across topics: Idioms, political hashtags, and Complex Contagion on twitter. In Proceedings of World Wide Web Conference.

Kristina Lerman is a Project Leader at the University of Southern California Information Sciences Institute and holds a joint appointment as a Research Associate Professor in the USC Computer Science Department. After a brief stint as a theoretical roboticist, she found her calling in blending together methods from physics, computer science and social science to address problems in social computing and social media analysis. She writes many papers that are greatly enjoyed by all of their twenty readers.

309 views
Observation: CSers do not value themselves, nor the results of their work? Are Databases ready for Gestural Workloads?